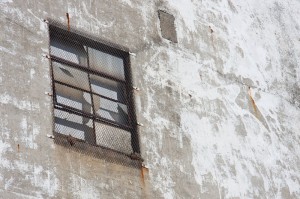 Photographers say that the best camera is the one you’ve got with you.  What they mean, of course, is that when you see a subject for a photo, you’re out of luck if you don’t have your camera with you.  When the elements don’t prohibit it, then, I try to keep my camera in the trunk.  The next corollary of this rule, though, is that merely having the camera in the car won’t help you if you don’t stop the car and go take some pictures!

Today, I noticed a grain silo just off an abandoned rail line and I decided to stop and get some shots.  This isn’t the first time I’d noticed this silo; it’s less than a block from a road I drive just about every day.  But today, the sun was shining and it was a good day to be outside, so I went to check it out.  As you can see, it’s in rough shape, but it made for some pretty interesting photos;  I love the textures and contrasts. 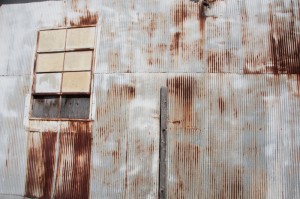 Almost all of the interesting stuff is up high, which presents some challenges of geometry.  All of my shots suffered severely from vertical perspective, so I ended up just giving up and making do with the screwy lines.  I even tried a few shots at very skewed angles, and one or two came out.

As a bonus, the leftovers of the rail line that ran next to the silo were still left, and I got a couple of shots there, too.  There aren’t any rails left, but most of the ties are still there, rotted away where the spikes had been. 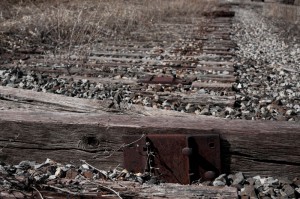 As always, check out the rest of these photos in the gallery, and thanks for stopping by.