Q: Are you an “available light photographer?  A: You bet I am — I use every damned light that’s available to me.

Next to mastering the exposure triangle, a photographer’s first nervous attempts at using a speedlite can be among the most difficult learning curves they can take on, but a little knowledge of artificial lighting can really save the day when conditions get tough.

You can get started learning flash photography with an on-camera speedlite, or even the pop-up flash on your camera, if so equipped, but if you’re going to learn to use artificial lighting, you might as well go ahead and start working with off-camera flash.  Not so long ago, off-camera flash could be an expensive proposition, but if you’re getting started today, it’s really pretty affordable, and I think you’ll find it a whole lot easier to put the flash right where you want it. 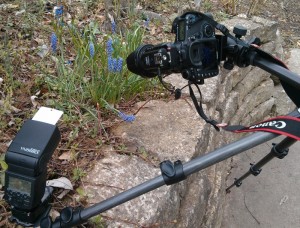 In the setup shown here, the flash at the lower-left is being triggered from the camera, so that it’ll fire when the shutter is released — that’s what you’re aiming for with off-camera flash, though you’ll probably have a bit more room between the camera and flash, this gives you the basic idea.

So, let’s look at some options for triggering that flash.  The most straightforward might be a cord — most DSLR’s and flash units will have plugs to trigger the flash from the camera, and again, up till fairly recently, this was an attractive option because of its comparatively low cost, but given the proliferation of low-cost wireless triggers in recent years, I really can’t recommend wired connections anymore. 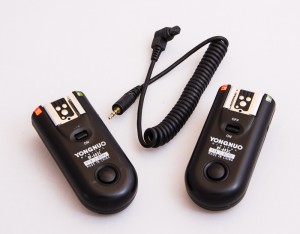 These little gems are Yongnuo RF-603C

triggers.  They’re powered by a pair of AAA batteries each, though the actual size of the trigger is probably closer to a pair of AA batteries — the hotshoes should show the scale pretty well.  These are manual triggers only, so the only command they can accomplish is FLASH – NOW!!

It turns out that this is really all you need in a lot of cases – if you’re happy setting flash power, zoom, etc., on your flash units yourself, these triggers are all you need.  They’re great for learning precisely because they’re so simple, but these triggers have one more trick up their sleeves that keeps them in my bag.  See that little coiled cord?  It turns out that one command they do for the flash also works as a shutter release command.  Using the appropriate version of that cord (there are several variations used by different cameras), you can also use these triggers as remote shutter releases, making these triggers remarkably versatile, and an absolute killer bargain at around $30. 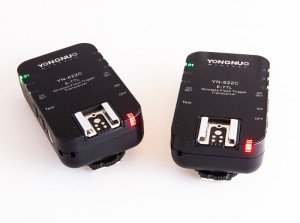 While manual triggers are perfectly sufficient for a lot of needs — especially for beginners, at some point, you’re likely to want to have a trigger that supports features like e-TTL (Canon) or i-TTL (Nikon), as well as High-Speed-Sync (HSS) and multiple flash channels.  Enter the Yongnuo YN-622C

– again, there are different versions for different camera brands, which is especially important in this case because these triggers “speak” the language used by your camera to communicate with flash units.  This communication is what flash TTL is all about — the camera tells the flash what focal length, shutter speed, and aperture you’re using, and the camera and flash negotiate the strength at which the flash fires, in much the same way that your camera’s metering helps you set the exposure parameters in the camera.

Note that the triggers shown here, like the 603’s, are “transceivers”, so either of these triggers will work as a transmitter when mounted on the camera or a receiver when mounted on the flash — they’re interchangeable.  There’s also a version of the 622 that’s a dedicated transmitter, with controls and an LCD, but not top-mounted hotshoe.  This transmitter version is great if you’re using a camera without flash controls built into the camera’s menu.

If you’re just getting started with flash photography, you might not be familiar with e-TTL / i-TTL, HSS, or flash channels, but there’s a good chance you’ll be interested in these things at some point.  Personally, I find e-TTL to be invaluable for shooting in changing lighting conditions — especially using flash-exposure-compensation (FEC) to adjust the ratio of ambient lighting to artificial light, and there are times when HSS lets you do things you just couldn’t do otherwise.  For around $80, the YN-622’s give you plenty of power to grow into.

FEC
Flash Exposure Compensation. Used in conjunction with TTL flash control to set the power output of an electronic flash. A typical FEC system lets you increase or decrease flash output relative to the metered "correct" setting by some amount.
i-TTL
Nikon's proprietary implementation of TTL flash control.
E-TTL
Canon's proprietary implementation of TTL flash control.
TTL
Through The Lens. This typically refers to the ability of a camera to perform operations such as metering using the lens actually mounted to the camera at the time rather than using a secondary lens or sensor to accomplish these things.
Speedlite
Canon's brand name for their electronic flash units. Both "speedlight" (Nikon's brand name) and "speedlite" have become somewhat genericized to refer to any brand of portable, battery-powered electronic flash.
Hotshoe
A mounting plate generally found on the top of a camera designed to mount an electronic flash.
Exposure
See Learning | Exposure.
Aperture
The opening in a camera's lens. As this opening widens or narrows, it increases or decreases the light available to the camera, much as your eye's pupil as it reacts to changing light.
DSLR
Digital Single Lens Reflex.
HSS
High Speed Sync. Used in flash photography to indicate flash capability when shutter speeds are faster than sync speed. See also Intro to High Speed Sync.