Years ago, Road America was the first road course (and among the first race tracks) I visited.  The sports cars, Camel GT racers and Indy cars I watched 25 years ago fueled my early love of racing, and the beautiful track in eastern Wisconsin remains a favorite of mine.

Living in Ohio now, it’s not as convenient for me to get to this great track as it used to be, but my son and I were happy we could get there for this year’s Continental Tire Road Race Showcase — a very full weekend with Continental Cup sports cars, Tudor sports cars, and supporting races including Porsche GT3’s, IMSA Lites, and MX5’s.  Simply put, if you love sports cars and road racing, it’s tough to beat a lineup like this.

Given all the racing to fit into this weekend, there was action on-track as early as Thursday, with testing sessions for the Continental Cup cars and supporting series, but we didn’t arrive until Friday – in time to get our campsite set up and catch some practice sessions and qualifications for the series that raced on Saturday.  If you’ve never been to Road America, arriving on a practice day can give you a great chance to get to know the track, and at 4.3 miles and 14 turns, there’s a lot of track to see. 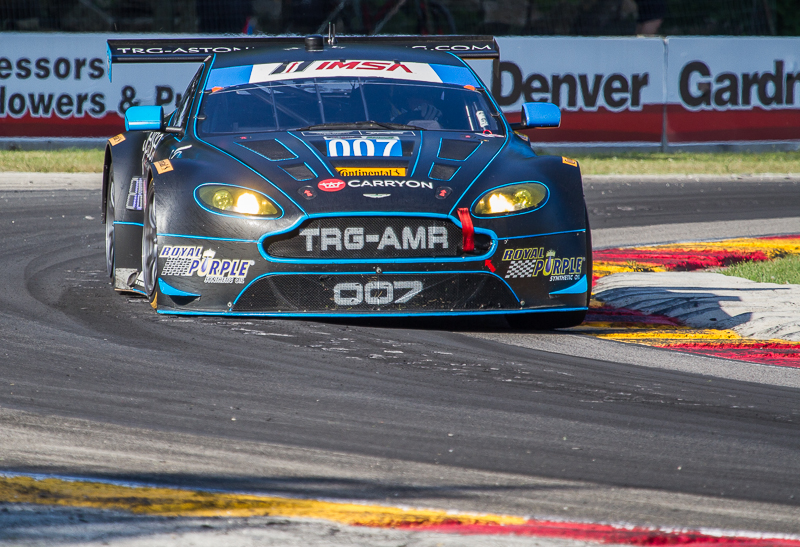 Friday was also a great time to preview the teams and cars running at these events.  Even though both the Continental Cup and the Tudor series are regularly televised, there’s something pretty fantastic about seeing these cars live.  These Astons, for instance, were not only drop-dead gorgeous, but their V-12’s were absolute screamers — just fantastic to see in person. 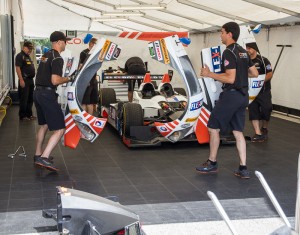 Amid all the on-track activities, the paddock was also quite active.  It was a great time for the Core Autosport team to practice changing nose assemblies; sadly, it would turn out later they’d need to put those skills to work. 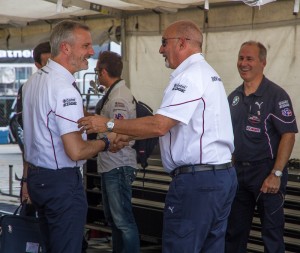 Road America offers great paddock access for fans throughout the weekend, but on Friday, crowds are more manageable and teams tend to be about as relaxed as they’ll get during the weekend.  Here, Ohio legend Bobby Rahal greets a team member, 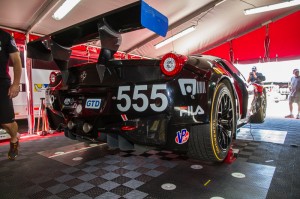 and the AIM Autosport team was gracious enough to invite us into their garage for some pictures.

After dinner, though, we saw that for many teams, work goes on well into the night — several teams were still hard at work well after 10pm. 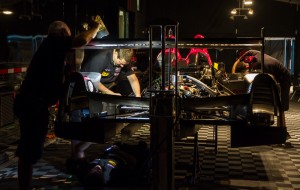 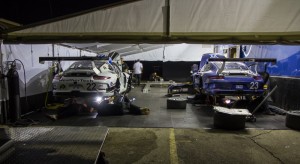 Saturday was a very busy day, with all classes on track and and one of the weekend’s feature races.  The MX5’s were first on track in the morning, and although they don’t provide quite the adrenaline rush of the “big boy” cars, these scrappy cars always put on a good fight.  Here, a line of MX5’s snakes down Thunder Valley — one of Road America’s iconic stretches of track.  In the distance, Canada corner is visible.  The hills on either side of this location provide a unique sensation for drivers and spectators alike as the cars near the end of the 4.3-mile circuit. 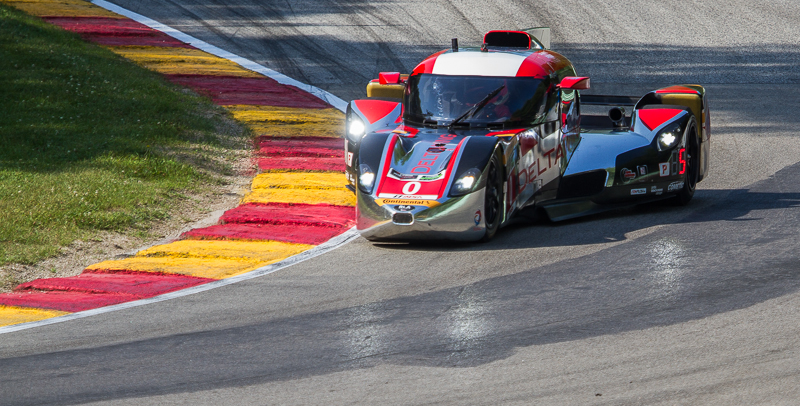 Following the MX5’s, the Tudor cars took the track again, including the one-of-a-kind Nissan Deltawing, seen here working around Canada.  It’s a testament to the Tudor series that it consistently pits such a wide-ranging group of designs against one another.  The Deltawing, despite its crazy-looking geometry, competed well against traditional designs, though it seemed visibly nervous in low-speed corners like this. 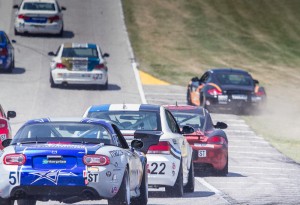 Saturday afternoon saw the first feature race of the weekend: the Continental Tire Sportscar Challenge.  Although there are two classes of cars in this series, both classes are based on non-exotic sports cars and sports sedans.  Save a couple of Aston Martins and maybe some Porsches, these cars are pretty mainstream: Camaros, Mustangs, Civics, and so on.  These cars are very closely-matched and very scrappy, and action like this turn-5 melee is pretty typical — especially  after starts.

This poor Cayman shows the effects of some of these early-lap shenanigans, and it had an awful lot of company on-track.  By the end of the race, quite a few cars had battle scars of some sort.

Toward the end of the race, the late afternoon sun catches another tightly-packed group of cars as they round  Canada corner — imagine the challenge of driving into that sunlight! 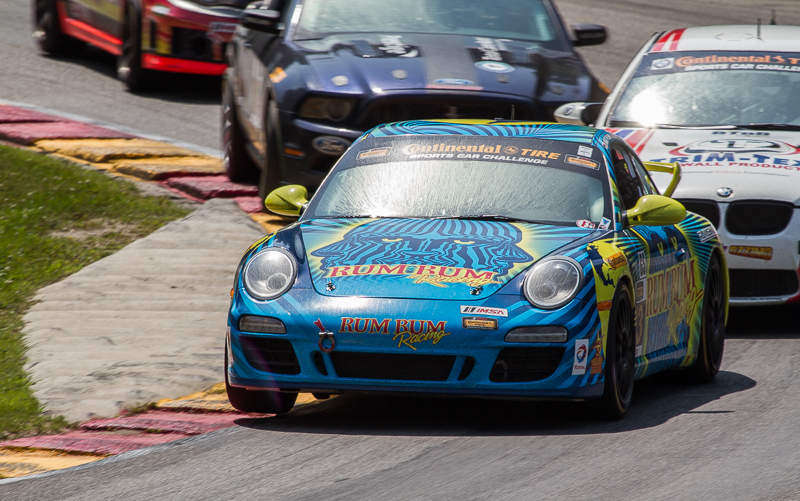 Following the Continental race, the Tudor cars made another appearance — this time, each class took the track by itself for qualifying, where we saw some pretty spirited efforts to set fast times.  This off at turn 6 won’t earn a pole, and several other drivers pushed off in the same place. 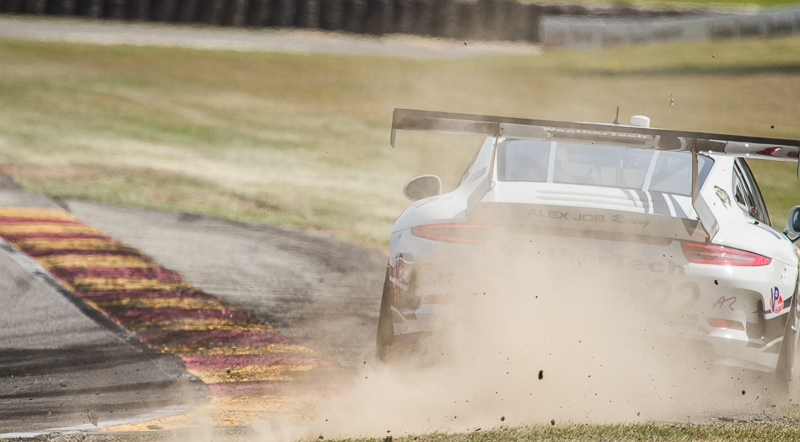 Saturday wrapped up with a couple of supporting races — the first GT3 Cup and MX5 races — definitely a full day.

Sunday morning was busy, with the second IMSA Lites race of the weekend, then Tudor warmups, GT3 Cup race #2, and MX5 race #2.

Following the supporting races, the Tudor pre-race activities ran through lunch, with a grid walk and on-track pace laps, and then it was time for the second feature race of the weekend. 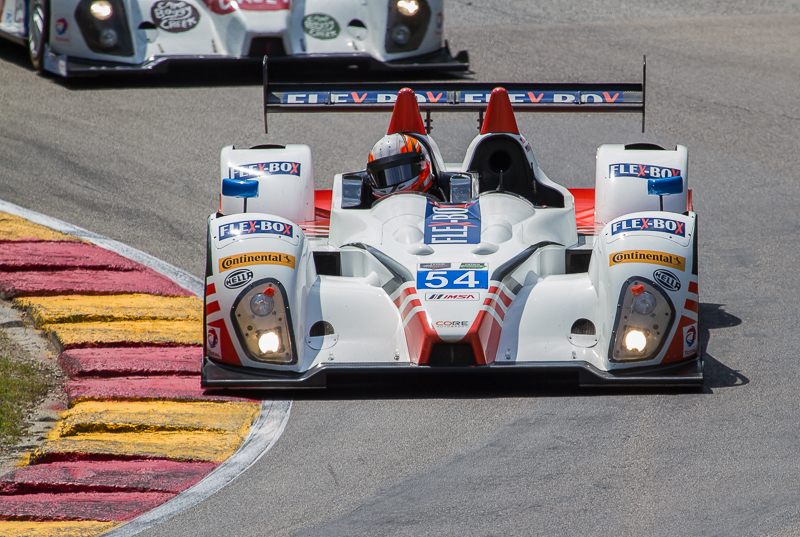 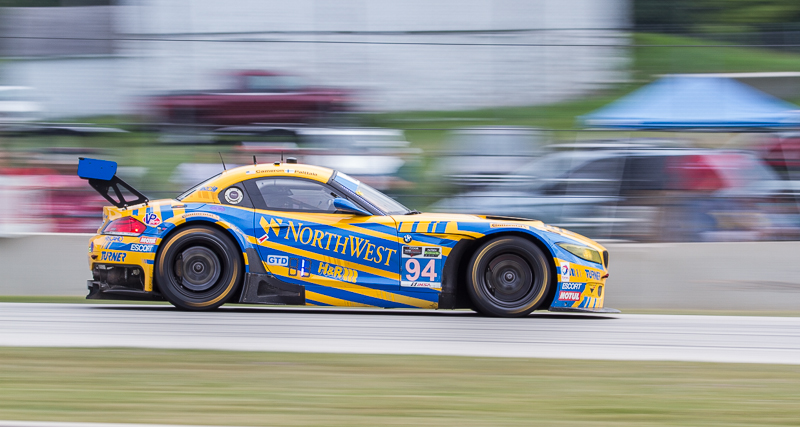 The weekend wrapped up with two more supporting races, making a very full weekend, indeed.  If you left Road America without having seen your share of great racing, I’m afraid you just weren’t paying attention, because the action on-track didn’t stop all weekend long.

If you’ve ever considered a trip to Road America, I really should warn you that you’re likely embarking on a life-long love affair.  I’ve yet to meet a race fan who doesn’t want to go back almost immediately after departing.  In addition to friendly people everywhere you turn, the track itself is gorgeous.  You’ll often hear Road America described as very similar to Spa, and the similarities really exist on several levels.  Like Spa, this is a long track, at 4.3 miles and 14 turns.  A track this size has room for some great low-speed technical turns, but like Spa, it features some epic straights, and is considered a track where high horsepower and low downforce carry the day.  Another feature shared with Spa is a fantastic variety of elevations.  The photo above shows how “Thunder Valley” got its name, and is a great example not only of the elevation changes here, but of some of the outstanding vantage points available to fans. 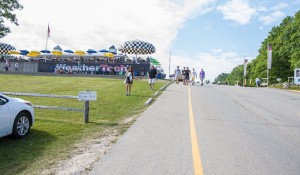 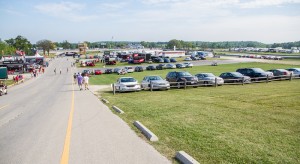 Here, a look uphill from the infield road between turn 5 and the paddock, and another shot looking back downhill. This hill is mimicked on the front straight, and although it’s sometimes difficult to tell when you’re watching TV footage from Road America, this hill really affects the race off turn 14 up to the start-finish line.  More than one race at Road America has been won by a strong motor on the last lap.

Hills like this continue throughout the grounds at Road America; indeed, the racetrack is nestled in the heart of the Kettle Moraine area of Wisconsin, and its glacial landscapes dominate the region.  Turning right from the location above, the track heads up another hill under the Corvette bridge toward turn 6.  On the right is one of the many hillside viewing areas, complete with a shady canopy that’s welcomed by fans on sunny days.

In the paddock, Friday’s businesslike atmosphere starts busting with fans by Saturday and Sunday.  Many road courses open their paddocks to fans, but I’ve always found Road America to be particularly accommodating.  On this weekend, fans who weren’t glued to the track were able to meet the Tudor drivers at an autograph session held during a couple of the supporting races on Sunday morning.  Alas, the line to meet Patrick Dempsey hinted that there may have been some fans who’d heard of him before he started racing! 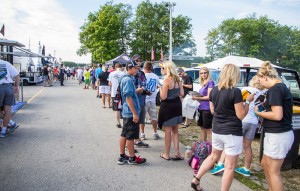 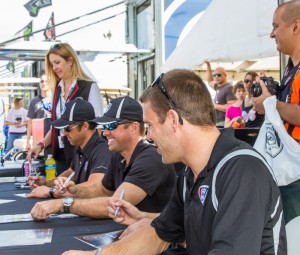 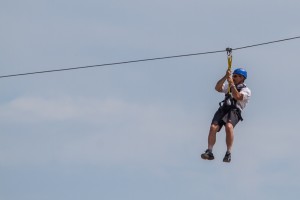 For those who’ve had their fill of racing, there’s a go-kart track, zipline, manufacturer exhibits, and plenty of refreshment stands to help break up the day.  The zipline, incidentally, is another product of the naturally hilly terrain — it leaves from the hill up by this food stand — higher even than the spectator area above — and glides down to the low ground near turn 14. 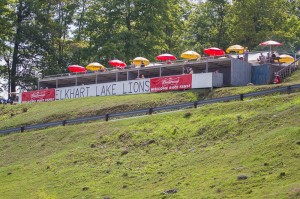 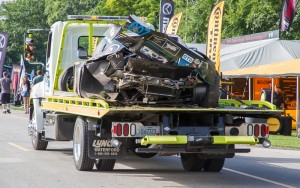 When the racing is done, wounded cars make the long, sad journey back to the paddock from the far reaches of the track.  This once-pristine Aston Martin Vantage will never race again. [clear] 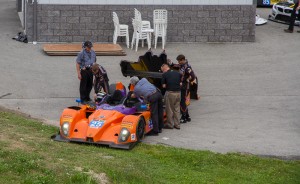 Cars that are more tired than wounded are pushed by their crews.  Like used-up rockets, there’s no energy left in these machines, and not much more in their crews, but the majority of these cars will be rejuvenated or overhauled in time to race two weeks later at VIR. [clear] 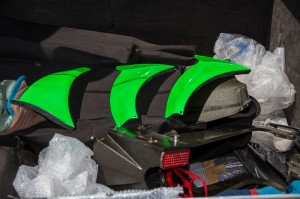 Crates are packed, trucks are loaded, and the big rigs pull out until next year. 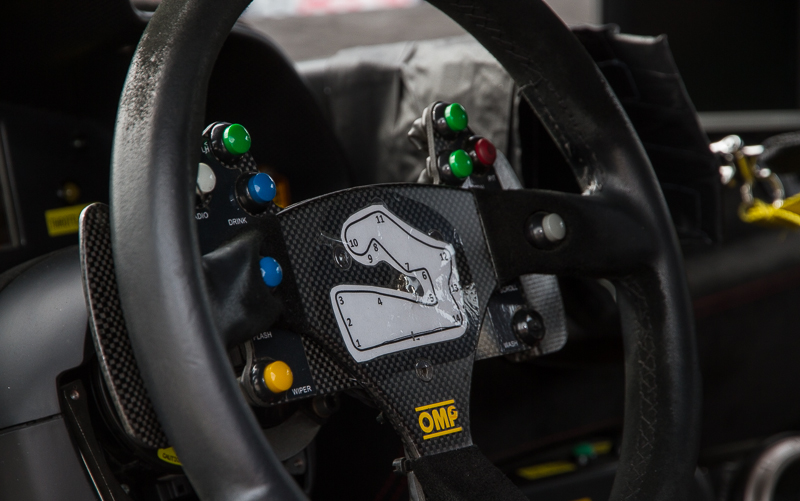