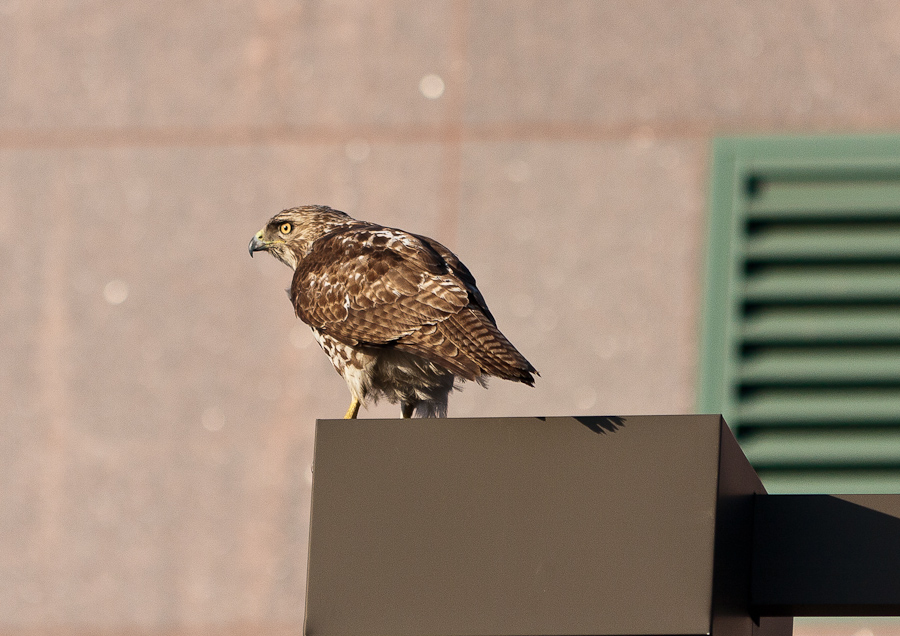 I’ve seen this hawk hanging around work on and off for around two years now.  I’ve tried a few times to get some shots of him (her?), and so far, I think these have turned out the best.  I’m just about positive this is a broad-winged hawk, though I’d happily accept identification from a more reliable source. 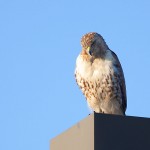 Most times I see this guy, he’s sitting in a tree out by the road, so I’ve needed to make a special effort to go take his picture, but this morning, I was surprised to see him cruise right over and perch on a light post near me.  I grabbed my camera with a 70-300 lens and started shooting.  I was pretty happy with the light this morning, too, as I’ve struggled in the past with really overcast conditions.  The bright sunlight this morning cast some harsh shadows, but I was able to lighten them up a little in Photoshop Express.  The good news, though, was that I was able to keep my shutter speed up without ending up with dark photos or resorting to high (noisy) ISO settings. 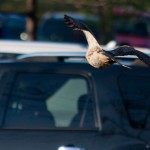 As usual, just about the time I’d get close and snap a couple photos, this guy would decide to move just a little further away, and I had a tough time keeping up with him in mid-flight.  Here’s one of him swooping down between some cars in the lot, which just doesn’t look right at all.

The photo at the top of the page was his last perch before he finally decided to leave me behind for good.  I cropped this down from full-size, and the crop is probably not conventionally “correct” — normally, you’d want to position the subject in one of the thirds of the crop, and with a living subject, you’d normally leave space out in front of any movement or in the direction the animal is looking, so in this case, we’d position the hawk on the right and leave space to his left.  I went with a crop on the opposite side, however, so I could include the green HVAC vent in the background simply because I felt like there was way too much brown in the photo.  Let me know if you like it. 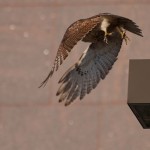 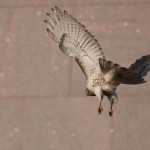 Finally, here are a couple of in-flight photos that didn’t turn out too bad — check out the meat-hooks on this bird!

As usual, there are a few more photos in the gallery.