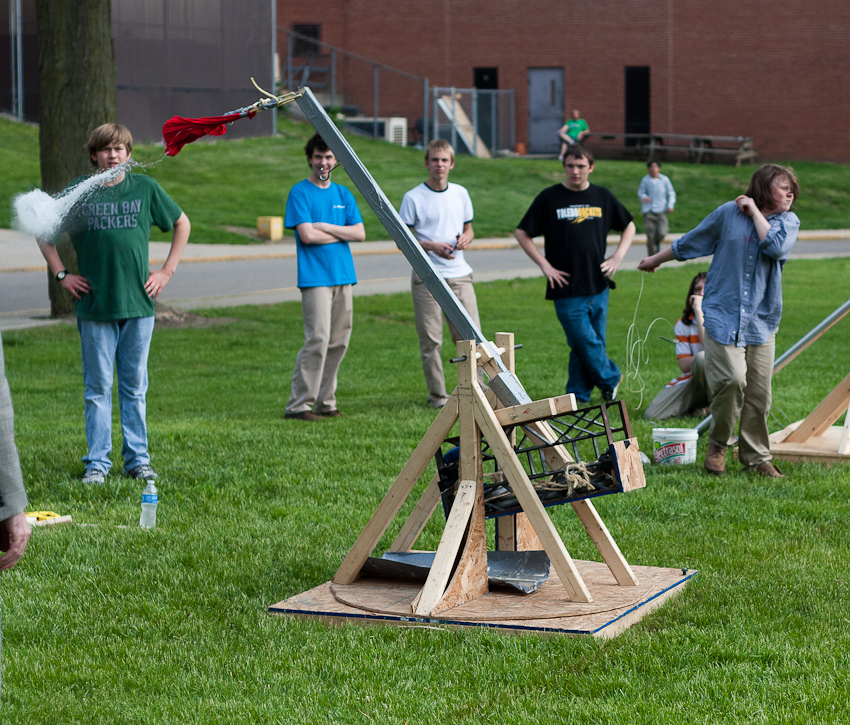 I’ve recently had the chance to play with the high-speed continuous shooting capabilities of my Canon 40D, and I’ve learned about a few things that affect its speed — some of which were pretty surprising to me.

My experiments started a couple weeks ago when I shot some pictures of a trebuchet my son built for school.  Since I wanted some shots in rapid succession, I set the camera to high-speed continuous drive and AI Servo autofocus mode.  I also grabbed my 50mm f/1.8 lens, figuring that a large aperture would let me keep my shutter speed up.  Not only does the high shutter speed stop action very well, I also knew that unless I was shooting at upwards of 1/1000 sec or so, I wouldn’t be hitting the 40D’s theoretical maximum 6.5 fps.

When I started shooting, though, I was surprised at how slowly the shots seemed to be taken.  They appeared, in fact, to slow down as stuff started moving around.  On the hunch that the lens’ focus speed might be slowing me down, I switched to my 17-85mm f/4.5-5.6 IS USM.  While this lens is considerably slower optically, its USM focus motor is lots faster than the ring-type focus motor in the 50mm lens.  Sure enough, I started seeing a faster frame rate.  Although I was happy to see better performance with the 17-85 lens, it still didn’t seem right that I’d have this sort of problem — after all, AI Servo is supposed to be the ideal setting for high-speed subjects, right?

Despite what I’d seen earlier, I tried the 50 again the next time I shot the trebuchet (about a week later) — but this time, I used AI focus instead of AI Servo.  Guess what?  The 40D was a machine gun with the 50mm lens.  This worked out great for that shoot, but I was more confused than ever.

I tried tapping the photo.stackexchange.com site for an answer, but I didn’t see anything that seemed quite right.  I did, however, see an answer that talked about focus-priority vs. release-priority, which seemed promising.  In focus-priority mode, the camera is supposed to wait until it’s got a focus-lock before shooting, while in release-priority mode, the camera takes a shot as soon as the shutter is pressed, whether there’s a good focus or not.  Although the 40D doesn’t have settings corresponding to these options, they seemed to describe what I was seeing pretty well, so I did a little digging, and things started to clear up.

It turns out that Canon’s AI Servo mode, going back to their first digital cameras, has used release priority on the first shot, and focus priority on successive shots.  This explained why the 17-85 lens was faster than the 50 — I was, in fact, being held up by the slower focus motor of the 50mm lens.  Since the AI Focus mode uses release priority, the 50 works great in this mode.  It also looks like some of the newer Canon cameras (including the 7D) have a much more sophisticated way of handling this problem.

Chalk up another lesson the hard way!