I was lucky enough to catch some great summer storms rolling through central Ohio last week, and I snagged a couple fairly decent lightning photos.  Although it’s not as difficult as you might imagine to get photos like this, there’s definitely a knack to it, and I’ve gone through a lot of really bad photos before getting any keepers at all.  I’ve written up a few tips here, though, and if you follow them, you, too, should be able to bring home some nice shots.

Although you might never give this a second thought, the type of storm, and even time of day play a big part in how successful you’ll be in capturing great lightning shots.  My best results have been at twilight, so if you can catch a storm around sunset, that’s ideal.  This is a timing shot, so storms that are producing lots of lightning give you more chances to get  a good shot, and you need to be standing somewhere dry when you shoot, too. 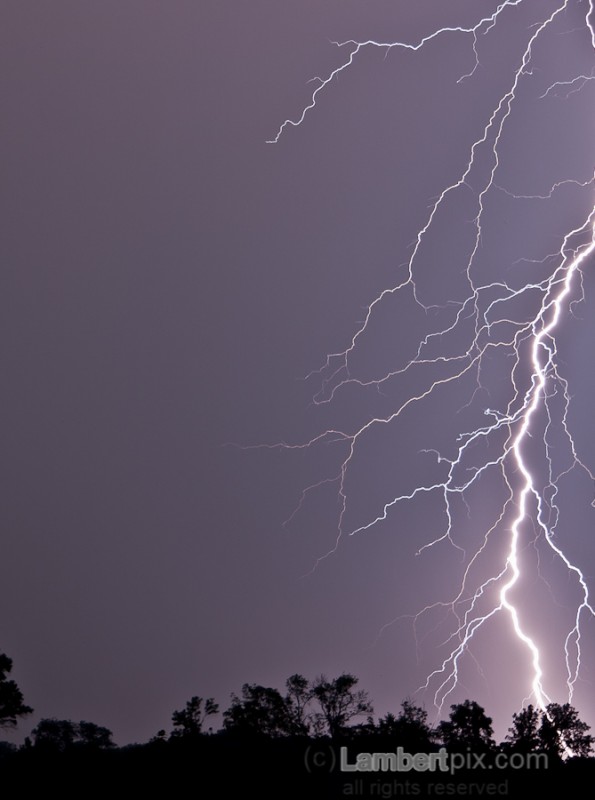 Summer storms that pop up from nowhere are really good at producing these conditions; they tend not to move too rapidly, so you can move yourself to wherever you want to be pretty easily, they’re usually pretty well-defined, so you can be near the lightning without getting wet, which is pretty convenient, and the heat and humidity that drive these storms can produce quite a lot of spectacular lightning, which brings me to my next point:

Watch out for fast-moving storms associated with large fronts, or those that have tornadic rotation.  These storms are unpredictable, and they move so quickly that they don’t usually make good subjects for photography.  They’re also usually accompanied by high winds that’ll give you trouble, too.  A slower-moving storm isn’t as likely to catch you off-guard, and it’ll give you more chances at a good photo.

Don’t forget that you’re standing outside near a thunderstorm, and if you’re close enough to photograph the lightning, you’re close enough to be hit by it.  According to NOAA, there’s no such thing as a safe place to be near a storm, but you can improve your odds a bit if you pay attention to what’s going on around you.  Note the direction the storm is moving, the direction you see lightning, and be sure to know the signs of imminent lightning in your area and be able to reach a building or car in seconds if you need to.

If you’re using an aluminum tripod, you can be fairly certain it’s not going to make any meaningful difference in terms of where lightning is going to strike, but if you’ve got a  carbon tripod, this is probably a great time to bring it along.

You’re trying for a medium-long exposure (1-10 seconds), so you absolutely need to have a tripod for this shot.  I usually find it easiest to shoot in shutter-priority (Tv) mode, adjusting exposure up or down a bit if necessary.  If you’re shooting around sunset, the lighting conditions are going to change while you’re shooting, so shutter-priority will let you adjust the length of your shot while the camera changes aperture to match.  Some people prefr to use manual mode, and that’s fine, too.

Any tripod-mounted shot will benefit from a remote shutter release so you don’t jiggle the camera while hitting the shutter.  If you don’t have a remote shutter, try a two-second self-timer shot.  A longer delay will work, but you’re going to have large periods of time when you’re not taking pictures this way, and it’s virtually guaranteed that this is when the lightning will appear.  Since you’re going to such pains to avoid camera shake, you can understand why you’re trying to avoid windy storms, too — they’re going to blow your camera around during the shot, ensuring that you don’t get any crisp shots.

Set your shutter for somewhere around five seconds — less if  it’s still light out, and more if it’s darker.  Watch your aperture and exposure and adjust as needed.  I’ve had good results around f/6-f/8.  Keep your ISO fairly low – like 100-200.  Now, aim the camera, take a shot, and repeat.  You’ll have a few seconds between shots when your shutter isn’t open, but if your shutter speed is five seconds or longer, you’ll have your shutter open more than it’s closed. 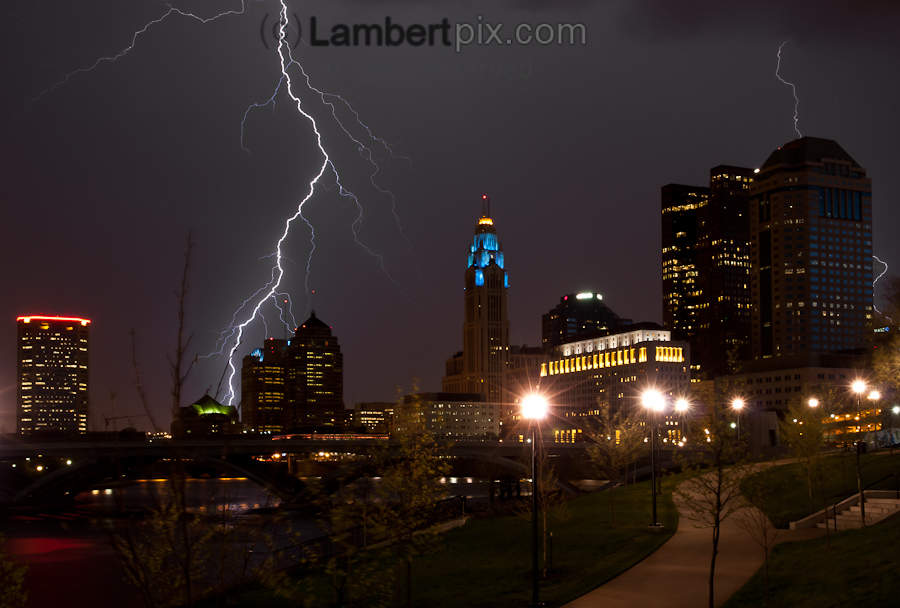 When you’re starting out, you’ll probably just want to step outside and  get a couple shots, but after you’ve got the basics down, you’ll want to think about the composition of your shot a bit — your photos will be a lot more interesting if they’ve got more in them than just the lightning.

If you’ve got a clear view of the horizon, a wide-angle shot can give you a little foreground interest and a wider field-of-view to give you more room across the sky to catch a bolt.  Try including a subject in the foreground, or let the lightning backlight a subject to create silhouettes in the foreground.  A storm at sunset is great if you can get a bolt along with the fading colors of sunset (see the last photo below).

Back home, you’ll want to do a little post-processing to get the most out of your best shots.  I shoot RAW for best results and use Lightroom for most processing — Photoshop Express if I need to do any specific detail work that Lightroom can’t handle (which isn’t much).  On the main shot at the top of this page, I adjusted the white balance just a bit to ease the purple color, set recovery and clarity rather high — both near 100, and bumped contrast a bit.  Finally, a little sharpening and noise reduction, and you’re getting pretty close.  I also lightened the foreground a bit – I tried using the graduated filter tool in Lightroom, but I ended up doing the lightening in PS-E instead.  This photo was shot at ISO 100, f/5.6 and 13 seconds.

The first inset photo was shot at ISO 100, f/5.6, and 5 seconds — this was several minutes earlier, and there was just a bit more ambient light.  Post-processing on this was similar – lots of recovery and clarity, but on this photo, I boosted the blacks to create the sharp silhouettes in the foreground.

The last photo was shot at ISO 100, f/13 and 13 seconds.  Using the smaller aperture let me keep the shutter open long enough to catch the lightning on the left of the shot.  Post-processing was similar to the others, but on this one, I also bumped the vibrance  up a bit to bring out the colors of the sunset, and again, a little boost to the blacks helps the treeline stand out.

Exposure
See Learning | Exposure.
Aperture
The opening in a camera's lens. As this opening widens or narrows, it increases or decreases the light available to the camera, much as your eye's pupil as it reacts to changing light.