I don’t “set up” a whole lot of shots, but I spent a few minutes on this one, and I thought I’d take the time to write up the lighting setup.  The composition of the shot is pretty simple.  I wanted the fireplace to figure prominently in the shot, and the counter where the props are located is about thirty feet from the fireplace, so I wound up backing up another ten feet or so from the props and shooting with my 70-300 lens. 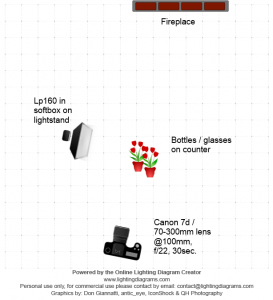 Although I wanted the photo to be predominantly about the light from the fireplace, with only that light, the glasses and bottle were pretty much invisible, so I set up my LumoPro LP160 and soft-box on a light stand to the left of the props.  The strobe is triggered with a Yongnuo 603c trigger — a great investment at a shade over $30, by the way.  The diagram at the right shows the layout — roughly.

I’m certain I’ll try a variation on this theme again, as I’m not sure I’m 100% sold on the outcome from this shot.  I’d like to re-compose to be able to use my 50mm lens – I’ve always been happy with the sharpness of that lens, and it’s still long enough to compress the background a bit.  Stay tuned, and I’ll post an update later.

Strobe
An external lighting system designed to work by providing a brief flash of light. Unlike portable electronic flashes, these are typically larger, wall-pluggable lighting systems designed for use in studio settings.
Exposure
See Learning | Exposure.