Photography, quite literally, is “painting with light,” yet we so often let available light control our photos, rather than the other way around.  This weekend, my Irises bloomed.  First to bloom were the white flowers in the photo above.  I noticed the blooms in the morning, and I thought the white flowers would look really nice against a black background.  I probably would have cut off a bloom or two and brought them inside to set up the lighting I wanted, but I decided to try shooting them where they stood.  Since I wanted a dark background, I figured I’d be waiting for evening, and then lighting the flowers with a strobe.  The morning was cloudy with sprinkles, and I also noticed that the blooms looked pretty good with water droplets.  Check.

Later that afternoon, though, after washing the car, I misted the blooms again and figured I’d try a shot or two during the daylight.  I grabbed my 7D and tripod, along with my Yongnuo YN-568EX strobe and YN-622C triggers and headed out to take a crack at these.  I didn’t think I’d get the shot I really wanted, but I thought I’d have a decent chance to frame a flower against a solid green background.  Since the Yongnuo strobe & triggers support HSS, though, I was able to do a whole lot better than I’d expected. 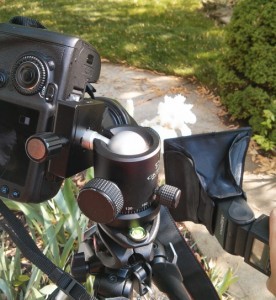 As shown on the right, I wound up getting the shot you see above in late afternoon sunlight — the overcast skies I’d seen earlier had blown over, leaving the shadows seen on the walk behind the flower.  It was *way* too bright out to get this shot — or so I thought.  I put a mini softbox on the strobe and hand-held it just outside the camera.  Shooting in Manual, I set ISO 10o and f/14 to retain a decent amount of DOF on the flower.  I zoomed the 15-85mm lens to 70mm and started playing with shutter speed.  Thanks to high-speed-sync, I was able to crank the shutter up to 1/800, which ended up darkening the background almost completely.  I did end up boosting blacks just a bit in Lightroom, but this is really very close to as-shot.

Again, the keys to this shot:

As luck would have it, the next day, the purple irises on the other side of the house bloomed.  Perfect, I thought — I’ll do these with a white background, and they’ll make a perfect complement to the white-on-black iris I shot the day before. 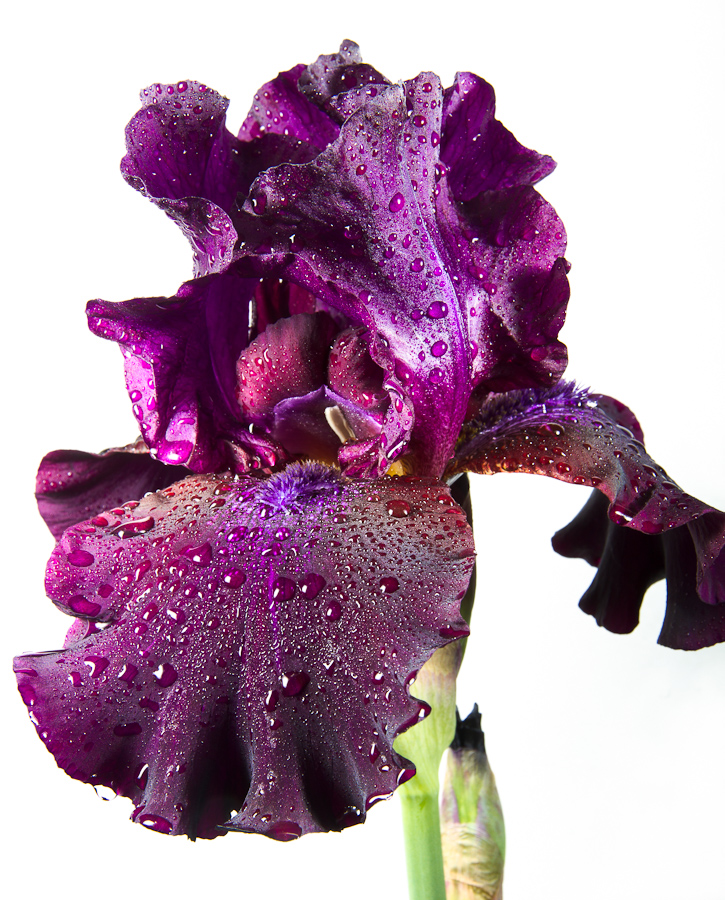 In this case, I needed to do just a bit more work to set up the shot, but I really wanted to try to get this without chopping down the flower.  As you can see, it worked reasonably well.  I knew I was going to need something behind the flower in this case to blow out the background — this flower is nestled pretty well in a bed with a lot of “mess” behind it, so I went hunting for some help.  I would have loved to have a pure white poster board or something like that, but I also knew that if I found something close and hit it with some close-up light, I’d wash out any imperfections, so when I found a big tupperware lid, I decided to give it a shot. 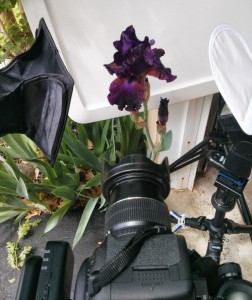 As you can see on the right, the tupperware lid was held in place about six inches behind the flower — I clamped it to a light stand.  As I’d done the previous day, I grabbed my Yongnuo speedlight & triggers and took a couple test shots.  I didn’t like the results at first, though — the lighting fall-off seen in the low-key shot the day before just wasn’t working in this case, so I grabbed some more light — my Lumopro LP-160 manual flash, with a Yongnuo 603c trigger, mounted on an Induro tripod to the right of the flower.  No softbox in this case, but a simple card reflector to diffuse the light a bit.  Notice that there’s some light spilling back onto that tupperware, too — that’s critical to creating this high-key look.  Since the LP-160 won’t do HSS, I was careful not to exceed 1/250 shutter speed, so I wound up with ISO 100, f/14, 1/250, with the same 15-85mm lens at 40mm.

Although the second shot wound up not having quite the impact of the first one, I’m still pleased that I was able to envision a shot and go out and knock it down pretty much the way I expected, and I still believe the two shots will look fairly striking next to one another, so I’m going to chalk this up to a win.

The next time you’re out shooting, I encourage you to try envisioning some shots the way you’d like to see them appear, and then see what you can do to make the light work to your advantage.  It turns out that all that gear you’re carrying around can be pretty helpful when you make it work for you!

Strobe
An external lighting system designed to work by providing a brief flash of light. Unlike portable electronic flashes, these are typically larger, wall-pluggable lighting systems designed for use in studio settings.
Speedlight (Speedlite)
Canon's brand name for their electronic flash units. Both "speedlight" (Nikon's brand name) and "speedlite" have become somewhat genericized to refer to any brand of portable, battery-powered electronic flash.
Aperture
The opening in a camera's lens. As this opening widens or narrows, it increases or decreases the light available to the camera, much as your eye's pupil as it reacts to changing light.
HSS
High Speed Sync. Used in flash photography to indicate flash capability when shutter speeds are faster than sync speed. See also Intro to High Speed Sync.