From time to time, I’ve seen “what kind of PC should I get” threads on various message boards, so hopefully there’s some interest in this.  I’m currently in the middle of building a replacement for my old Core 2 Quad system — pretty much from the ground up.  Here’s the shopping list, along with a couple notes about why I chose each component. 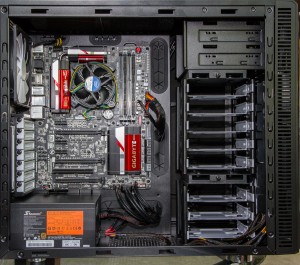 You may have noticed a couple things missing from this list:

That’s it for the shopping list — now it’s just a matter of putting it all together and getting migrated.  If you’re in the market for a new PC, this is a super-solid starting point, circa mid-2013.

Since I wrote this original article, I wound up adding a Corsair H100i water cooler (vs. the Swiftech above).  It turns out that Swiftech got themselves in a bit of a patent brew-ha-ha and had to withdraw their product from US markets, which is too bad, because it looked phenomenal.  I don’t think the H100i is in anywhere near the same league as the H220, but it seems to be doing ok.  I also broke down and bought an optical drive because it turned out to be way more of a pain to live without it than the $20 it took to fix that problem.

In order to add a little more context around my part-buying decisions, I also wrote up an addendum to this post to walk through my thoughts on PC parts in general.

Finally, I’d like to shout out to a great site I found to help with the planning and shopping for PC builds like this — here’s this build on pcpartpicker.com.