Earlier, I started this “Basics of Composition” series with an introduction to the importance of your subject.  In this edition, I’m going to explore the “rule of thirds” — perhaps the best-known rule of photographic composition, as well as the Fibonacci spiral, which is widely considered to be a close relative.  If you didn’t see the earlier article, this would be a great time to catch up before we move ahead. 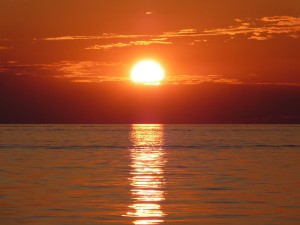 As with all compositional tools, the rule of thirds, is first and foremost a guideline, and it will work best for you if you understand why it works in the first place and keep that objective in mind as you employ it in your work.  Think back to your first photos — just like I did, I’ll bet you found a subject and centered it smack-dab in your viewfinder.  The sunset at the right is pleasant enough, but with the sun centered horizontally and the horizon centered vertically, this is about as predicable as you can get.  It’s exactly the shot you’d get from anybody at all if you handed them your camera and asked them to take a picture of the sunset — and that’s exactly what you’re trying to avoid. 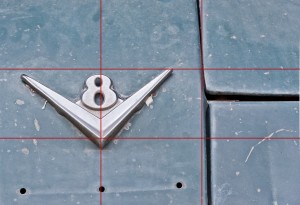 The rule of thirds simply divides your photo in thirds both vertically and horizontally, creating four vertex points where these lines intersect.  By aligning elements of your photo on (or near) these lines, you create an imbalance in the photo that tends to be a little more interesting than a completely centered photo.  In the photo on the left, the V8 emblem is aligned with the left 1/3 line, and the right line lines up with the body panel.  Note that you can align with either the horizontal or vertical lines, and/or any of the vertex points (which are automatically on the lines).  If I were to re-shoot this same scene again today, I might even play with moving the emblem up a bit to align the horizontal body panel and the holes in the hood with the horizontal thirds lines, but you get the idea here. 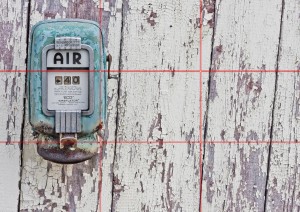 Again, the point with “rules” like this is to use them as guiding principles — not mandates.  The photo on the right has always been one of my favorites, even though the pump clearly is too far to the left with respect to the thirds line, it’s also not directly centered, and the negative space to the right of the pump unbalances the photo the same way the rule of thirds would.  The point is to move your subject away from dead-center, and the rule of thirds is a great tool to help you visualize this quickly.

A related tool has its roots in middle-aged math.  The Fibonacci Spiral or Golden Spiral is named for the Italian mathematician who might be best-known for the sequence of numbers where each number is the sum of the previous two (1, 1, 2, 3, 5, 8, 13, etc).  As thrilling as these numbers are, when you plot them in a grid and connect their corners with an arc, you wind up with a spiral that’s been seen in all sorts of natural objects; thus the belief that this spiral might also be a useful tool in composing our photos. 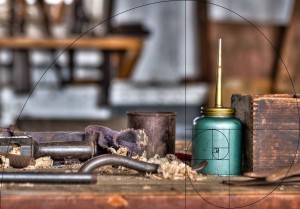 In this photo, the spiral’s origin is centered on the oil can, which luckily happens to be our subject.  The eagle-eyed among you might point out that this also winds up being pretty close to the thirds line, and you’d be right.  In this case, in fact, the back of the workbench also happens to line up pretty well with a horizontal thirds line, which further supports how similar these tools are.  When you’re working with them in your compositions, feel free to use whichever tool you’re more comfortable with, remembering that the overall objective is to get out of the habit of locking straight into “bullseye mode” in your viewfinder.