Ok, everyone – don’t panic, but Flickr changed again.  If you’re used to the old Flickr, this is probably a big annoyance for you, but give it a couple days and see if it doesn’t grow on you. 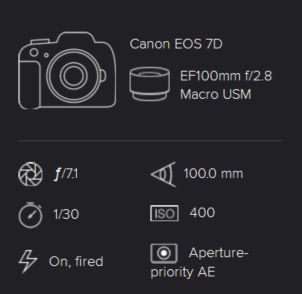 Personally, I think this new design is a really nice improvement for people who are learning photography techniques — take a look at the lower-right of the screen above.  All this information (known as EXIF) was available to you before, but it required a bit of digging.  Now, it’s all pretty easy to see, with nice little icons, too.

If you’ve ever looked at a shot and wondered “how’d they get that shot?”, this EXIF information is a great place to start.  In this case, you can see all sorts of helpful information, including:

Now, there’s bad news if you’re an EXIF-peeper, but none of this changes because of the new UI:

Eventually, you’ll get to the point where you’ll be able to just look at a photo and take a pretty good guess at the camera settings, and then, of course, this panel won’t help you too much, but in the meantime, be sure to watch it — you just might learn something.

EXIF
EXIF stands for "exchangeable image file format", which probably still doesn't help explain it much, but the idea is simple.  Images you save in many well-known formats can embed non-image information in them.  Typically, you'll see information like the date and time a photo was taken, the camera and (some) settings used to shoot it, and so on. Any given image can have no EXIF information at all (if it's been stripped or removed) or lots and lots of it -- although the mechanism used to embed the information is a standard, the actual usage of it depends highly on camera manufacturers, photographers, editors, and anyone else who manipulates these files at any point in their workflow.
Aperture
The opening in a camera's lens. As this opening widens or narrows, it increases or decreases the light available to the camera, much as your eye's pupil as it reacts to changing light.