Two years ago, Indycar decided that since they had every Indycar team around basically camped out in Indy for the month of May, they might be able to go ahead and get another race in on the road course that’s inscribed within the big 2 1/2-mile oval… and thus was born the Angie’s List Grand Prix of Indianapolis.

Having visited IMS in the past, I knew how challenging it is to shoot as a spectator — in fact, I vowed not to go back unless I was credentialed. A week or so before the GP, though, I saw a post from Angie’s List saying they were giving away some tickets, so I tossed my name into the hat, and Angie came through for me, and off to Indy I went.

As is normally the case at an event like this, there was action throughout the weekend, but I only made the drive over for the main event on Saturday, but they started the day fairly early with practice sessions and supporting races for the Pro Mazda and Indy Lights series. 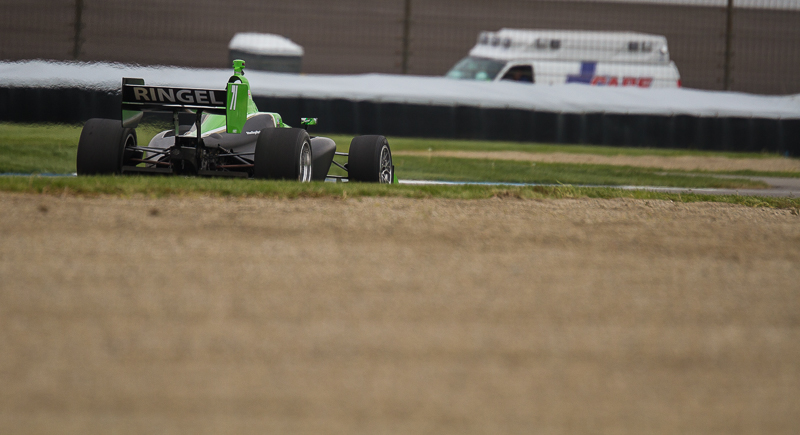 I rented a couple of great new telephoto lenses for the weekend, so I was eager to try them out.  Here, Sigma’s newest 120-300mm F2.8 DG OS HSM Sport lens does a great job of focusing on the subject and nicely blurring all that kitty litter in the foreground. 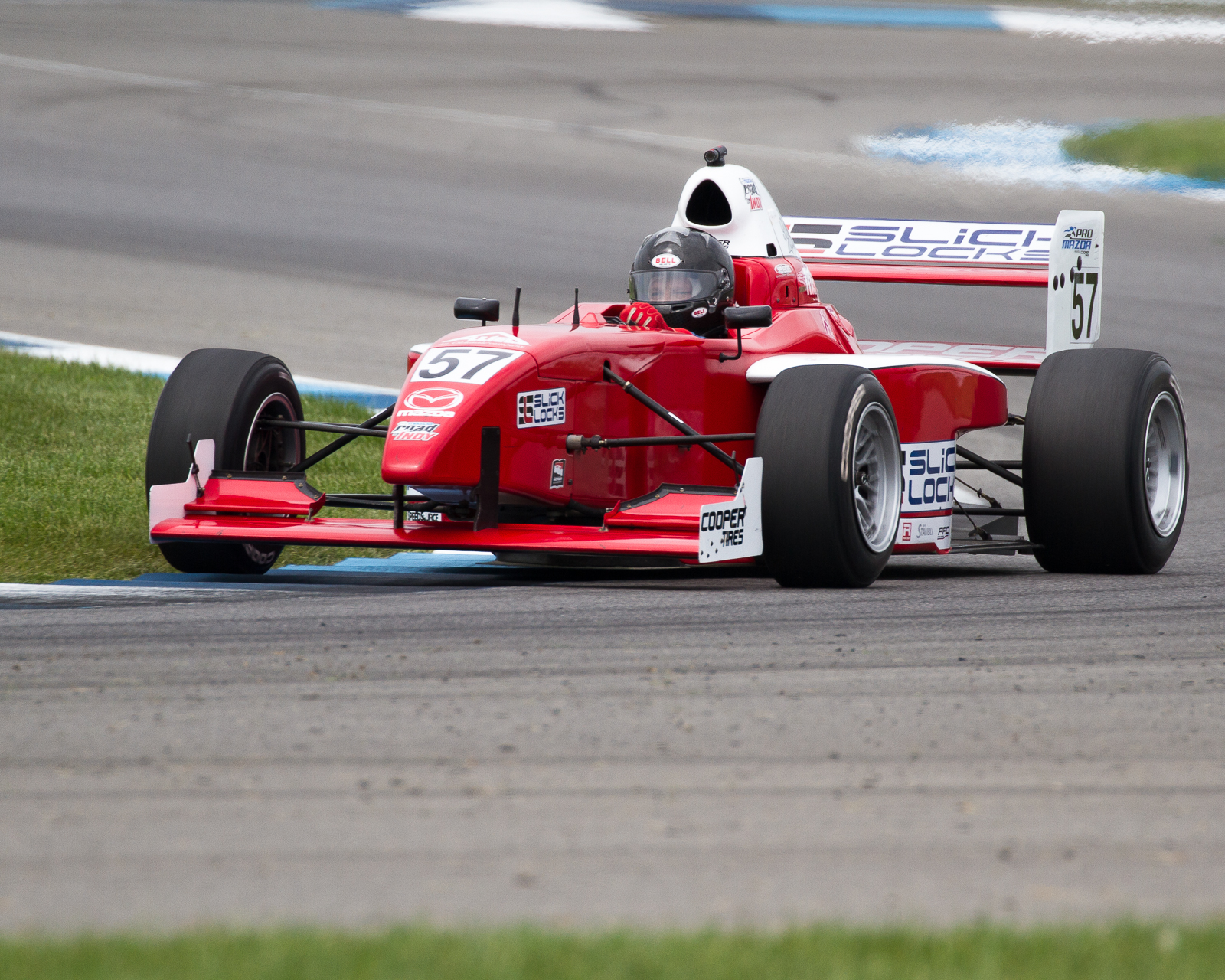 .  Watch for a review on these two lenses later — it was a real treat to shoot them one after the other at the same event. 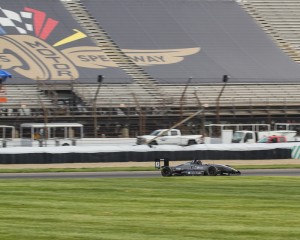 The Indianapolis Motor Speedway (IMS) is absolutely a bucket-list venue for any racing fan, and while it’s obviously best-known for its oval configuration and huge marquis events, road course weekends like this are a great way to experience the track in a slightly more manageable state of frenzy.  Still, there’s no getting away from the aura and mystique of the Brickyard; a race at Indy is one you’ll never forget.

Mystique notwithstanding, Indy can be a tough place to shoot as an amateur, though.  It’s maddeningly difficult to find a fan-accessible vantage point that isn’t obstructed with catch-fencing.  Here, one of the Pro Mazda cars works its way toward the Hulman Ave., infield straight — right past the turn-3 stands that are covered for this road-course event.  This shot is framed near the wide end of the Canon 100-400 lens in order to pick up the stands in the background, but if you plan on shooting on this end of the track, be sure to bring a lot of lens — even the 100-400 wasn’t really enough reach down here.

Moving around past the infield straight, turns 7-10 offer a couple decent vantage points to view competitors at fairly close range.  By this time, the final Pro Mazda race of the weekend was underway.  Although these cars are smaller and down significantly on power compared to the Indy Lights and IndyCars, the drivers tend to make up for it for completely ignoring the fact that passes like this are unequivocally impossible.  Great fun to watch — all three of these guys escaped with honor and mount intact. 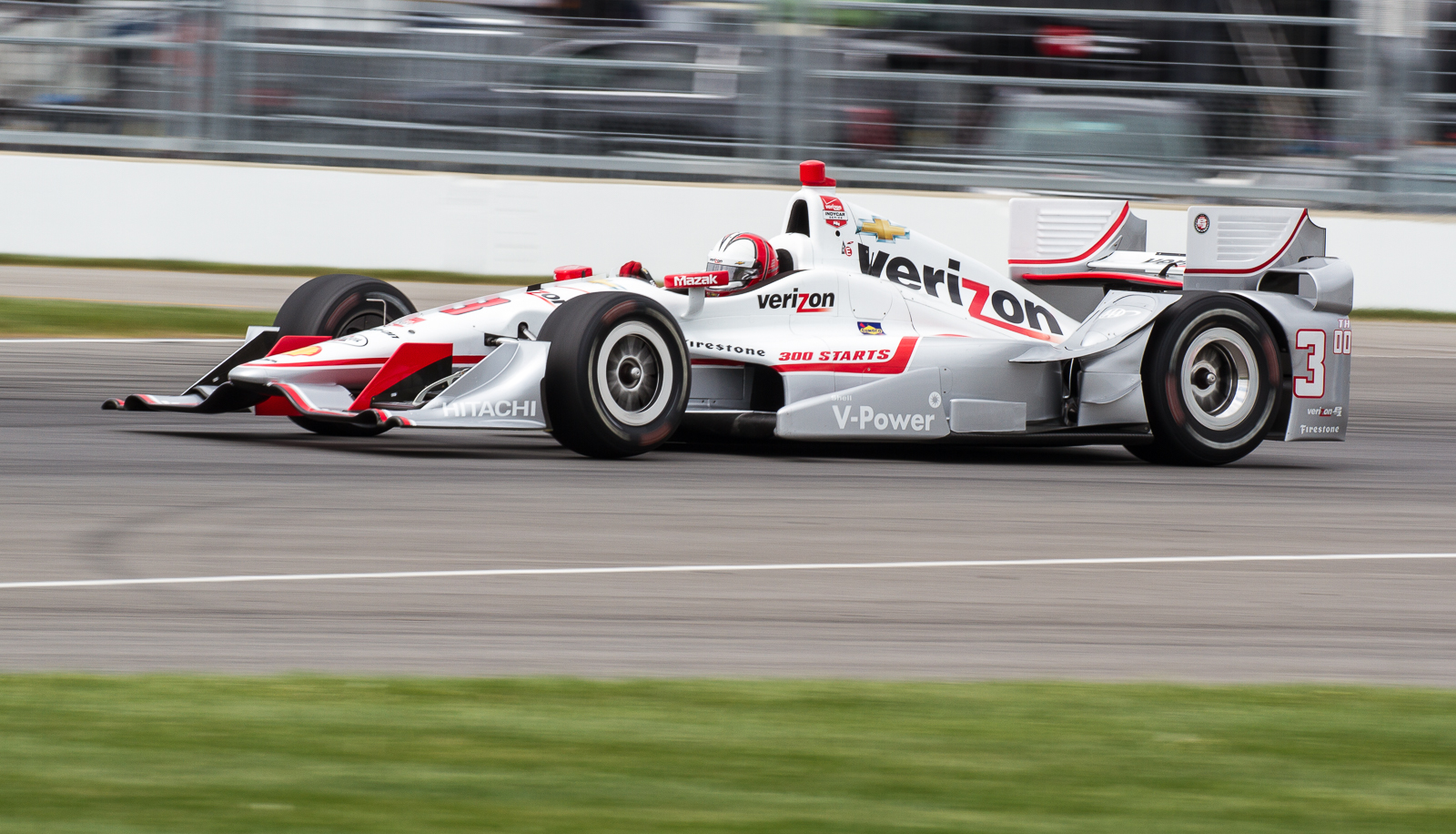 A warmup session for the IndyCars gave me a chance to do a little panning — there really aren’t too many spots for this at IMS.  Here’s Helio Castroneves moving right along in his Chevy.  You’ll notice a pretty dramatic difference in the “aero” kits between this and the Honda’s — pay special attention to the front wings. 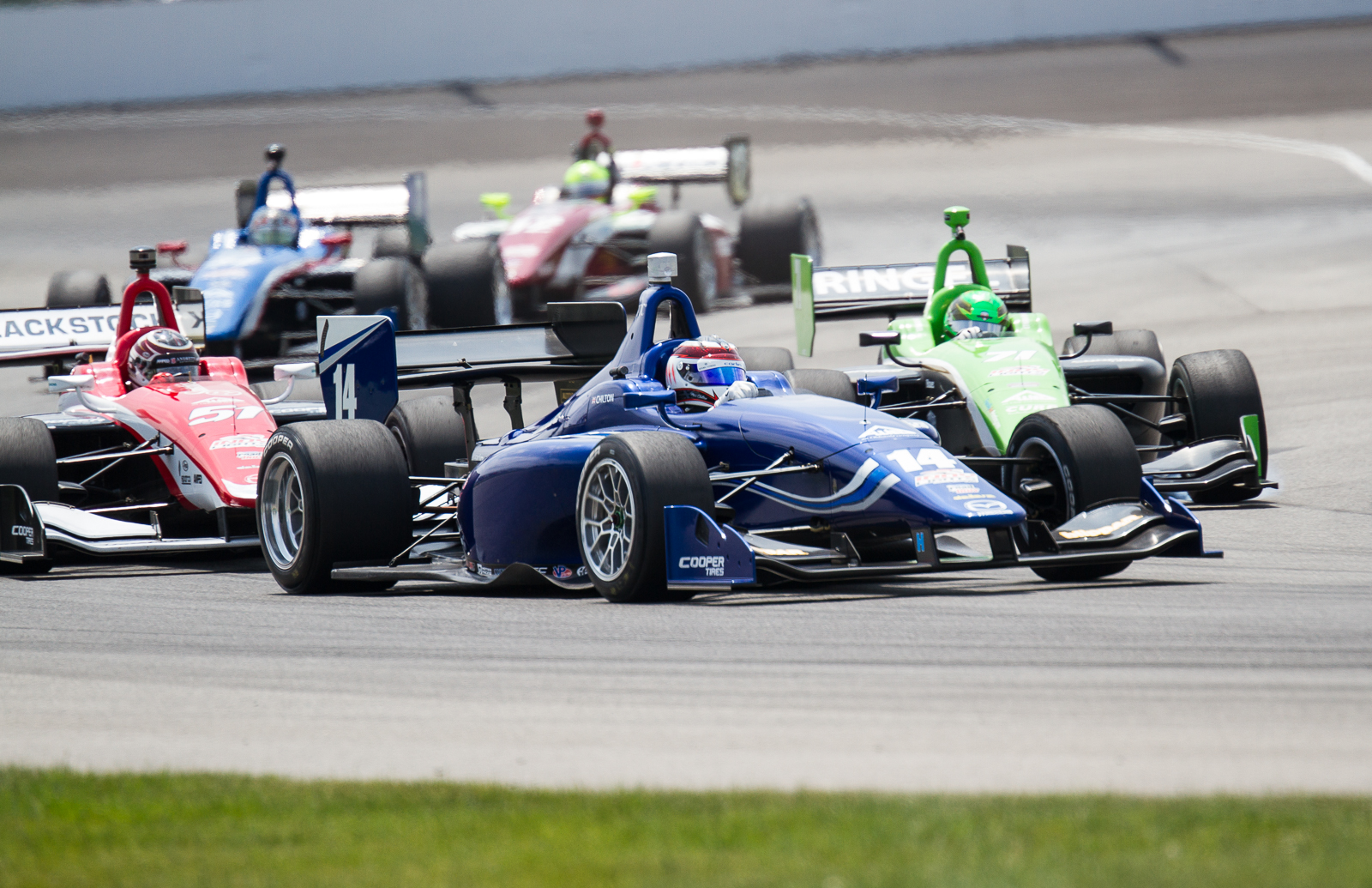 Next up was the Indy Lights feature race — here, former F1 hopeful Max Chilton is forming up with the field just before the final turn leading to the green flag.  This is another good vantage point for amateur photographers.  The last time I visited IMS, the Rolex sports cars skipped this section of track, heading straight out around Oval-turn-one instead. 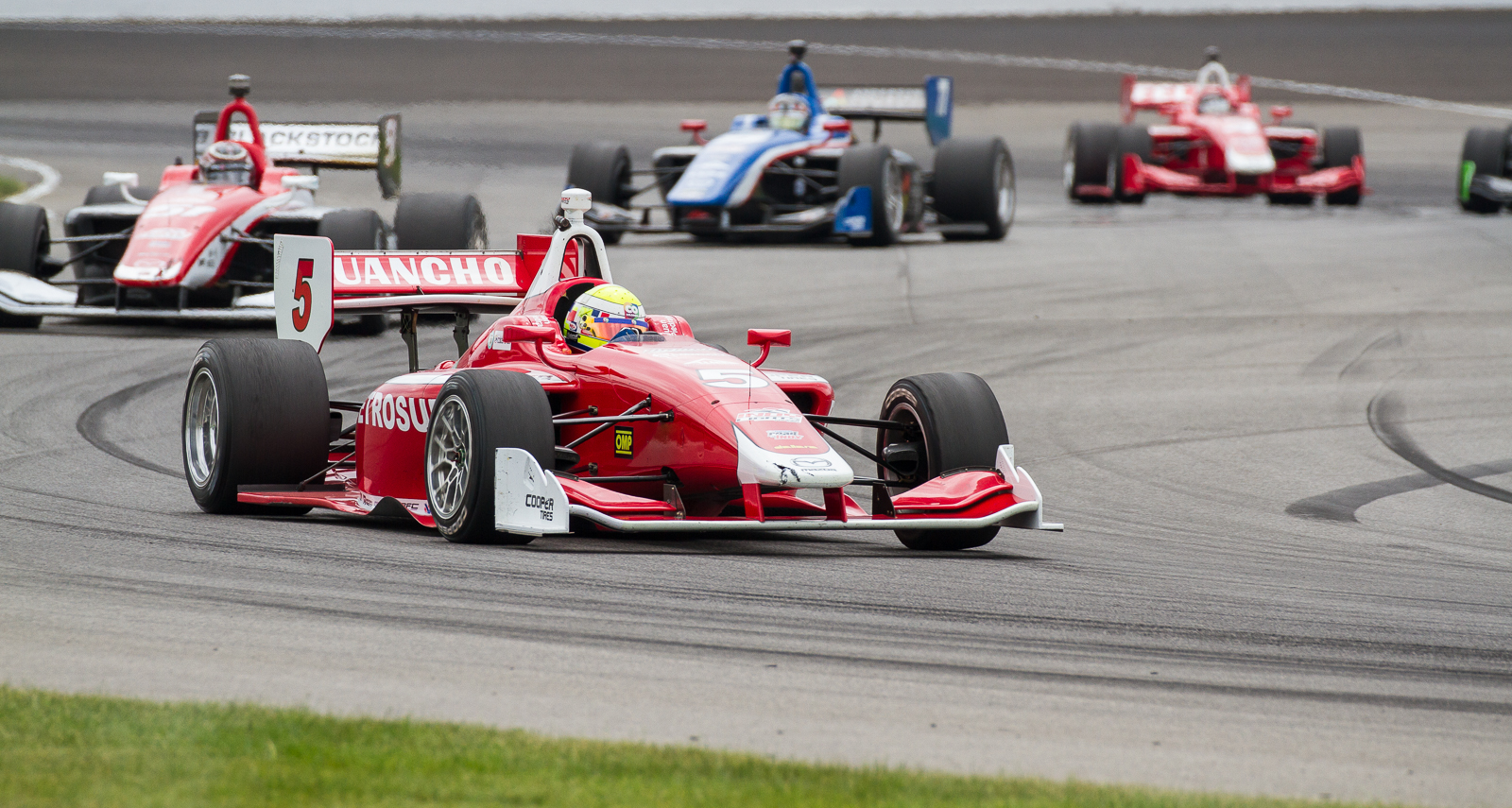 One of the really nice things about this particular vantage point is that you tend to see cars stack up a bit, which really adds some visual interest to a shot. 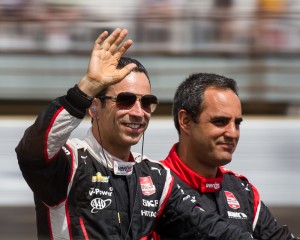 There was a brief intermission following the Lights race, which turned out to be fortuitously-timed.  Weather threatened on and off all day long, but it turned out that the only rain we actually got fell exactly between scheduled events.  As the rain cleared and the track dried, the main event festivities got rolling in earnest.  Drivers paraded in open cars — here, Helio Castroneves waves while Juan Pablo Montoya looks forward to getting his race in gear. 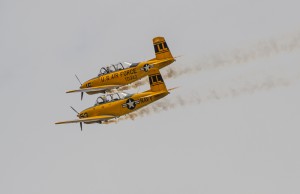 Here’s the flyover from the opening ceremoneies — a perfect example of getting caught in the wrong mode.  I’ve shot enough prop planes over the years to know about slowing the shutter down to blur the props, but when these guys appeared overhead while I was in “race car” mode, I shot with the settings I had.  The Canon 100-400 did a great job of stabilizing this hand-held shot, though. 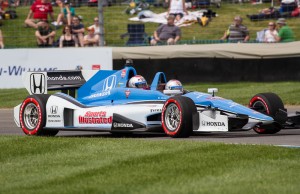 The Honda two-seater gives one fan at each race a chance to ride along on a pace lap with Mario Andretti — I’d sign up for this any time!  Even though this car won’t reach the same sort of speeds that the racers will, I’m sure it’s a fantastic experience for all of the fans lucky enough to win this great perk! 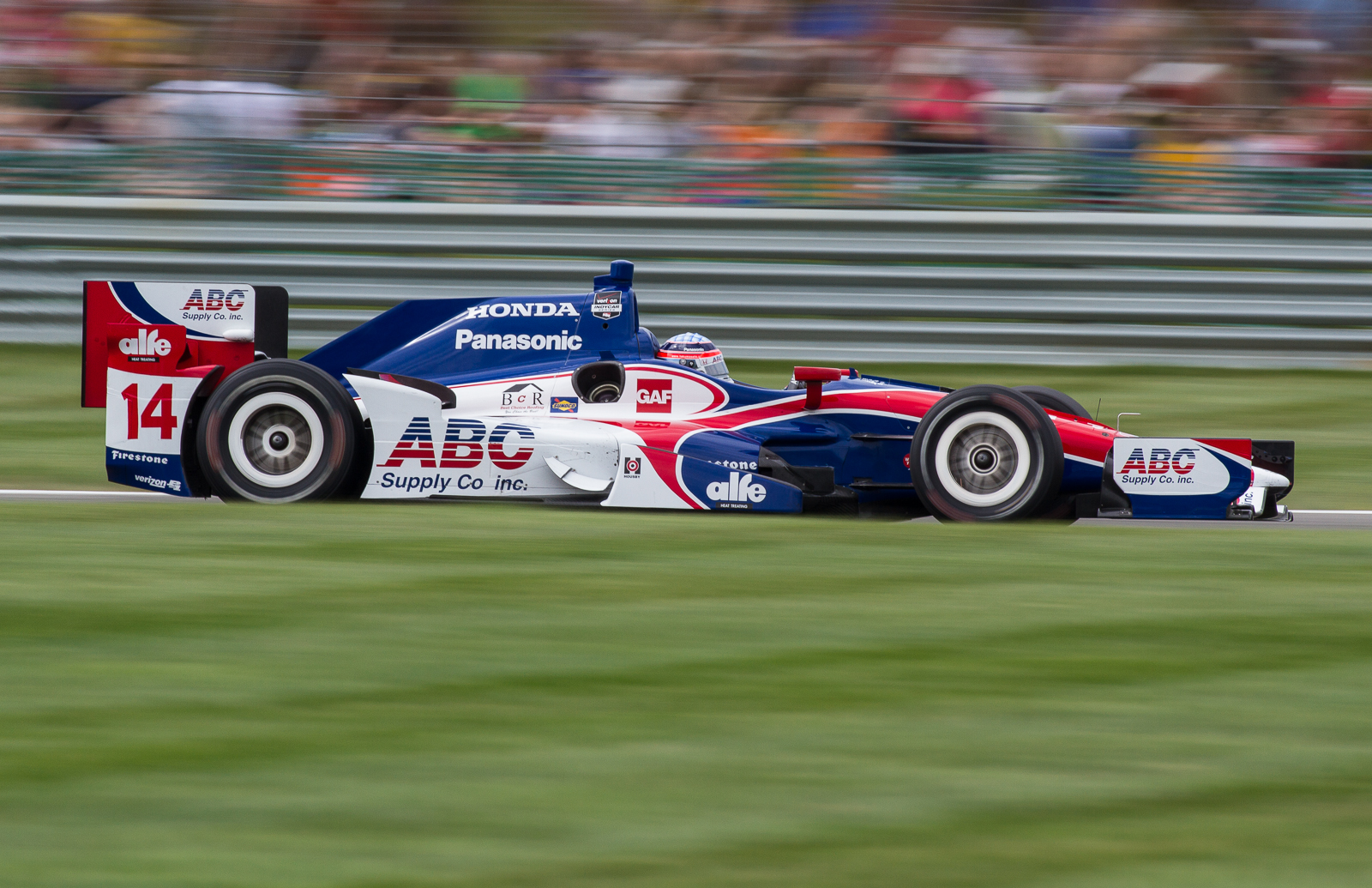 After a full day of preludes, the IndyCars finally took the track for the feature race — above, Takuma Sato works through the infield twisties in his Honda, and below, Marco Andretti nears the end of a lap as he approaches the main straightaway.  The Sigma did a great job throwing the car in back out of focus to draw attention to Marco’s car in the foreground — this is exactly what you want that f/2.8 glass for. 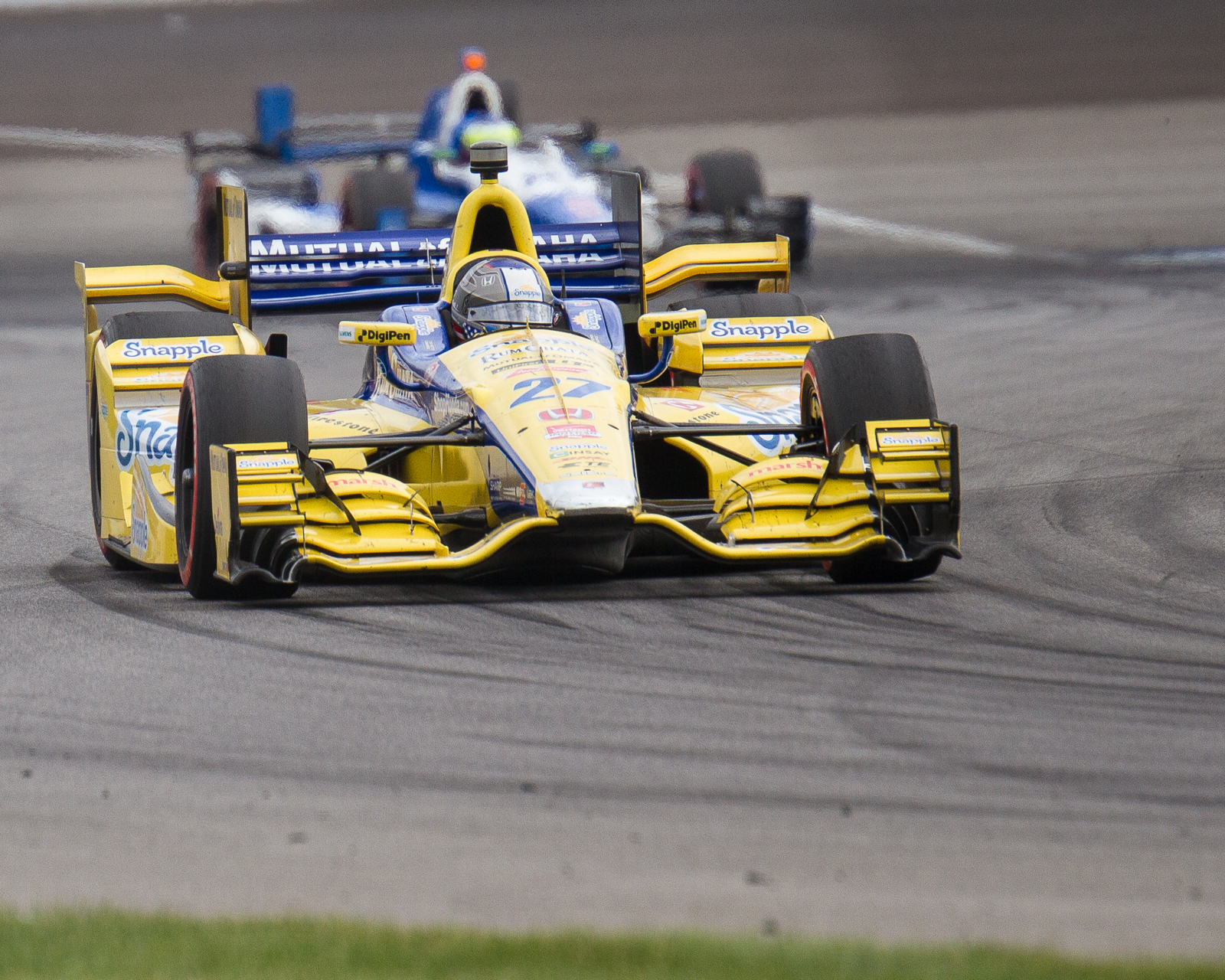 Here’s a look down the long infield straight — aka Hulman Blvd, as seen (barely) over a guarding fence (notice the grey in the lower-right).  This is absolutely one of the vantage points where better access would be welcomed, since this is an area that typically features quite a bit of action, and shows a great iconic background, too.

As the race unfolded, the sun began to set over the main straight, throwing a beautiful golden cast across the turns 8-9-10 complex.  Rookie Francesco Dracone is no doubt trying to find a suitable place to let Helio Castroneves overtake — Francesco finished down a couple laps to the leaders. 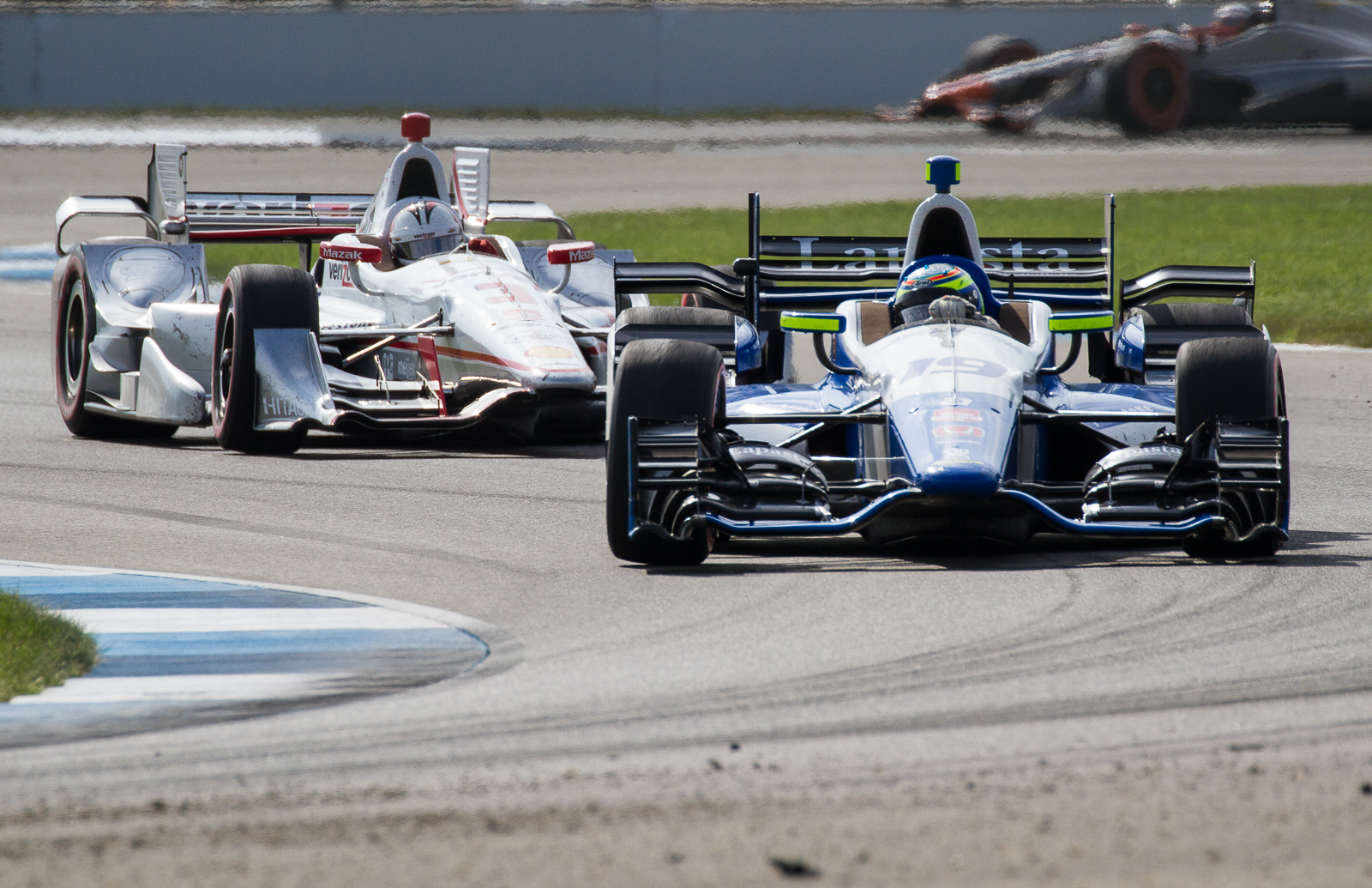 Once again, a big thanks to Angie’s List for the chance to attend this event — it was great to see another race in Indy!